redBus is the world’s largest e-ticketing (bus tickets) platform and has now started providing bus services in the European continent. By choosing redBus as their travel partner on the Oxford to London trip, one can secure convenient travel and cheap bus tickets.

How to book Oxford to London bus tickets?

The process to book London to Oxford bus tickets with redBus is as follows:

• On the first webpage, enter Oxford in the ‘From’ section and London in the ‘To’ section, respectively. Press the ‘Search Buses’ icon on the interface after entering your bus journey date.

• Select a preferred bus from the list of buses and then select your seat from the seat layout.

• Enter your boarding/dropping point and press the ‘Proceed to Book’ button displayed on the interface.

• Complete the online payment to confirm your London to Oxford bus tickets with redBus. You can also apply a coupon code on redBus to lower your Oxford to London bus ticket price. 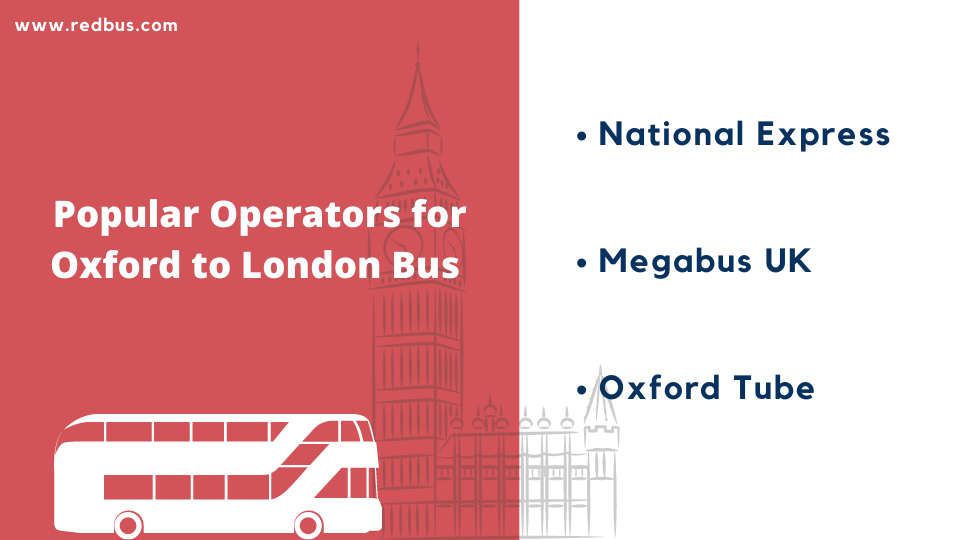 The presence of various buses by different operators makes this bus route a prominent one in the UK. Via the redBus website, you can filter buses from any specific/preferred bus operator. The top operators servicing this route in the UK are as follows:

For booking an Oxford to London bus, one can utilize redBus offers, coupon codes, and discounts to lower the bus ticket cost. You can also compare the prices of various Oxford to London buses via the redBus website. You can also sort buses according to their fare via the redBus website. redBus allows you to sort buses from cheapest to the highest fare and vice-versa via its online interface.

Q: Do I need to print my ticket for this bus route?
A: This depends upon the bus operator and the country you are travelling in. You can check this information while booking a bus ticket for a particular bus operator. However, most of the bus operators allow M-ticket or E-ticket sent to your registered email address, you may require to print the ticket if any bus operator specifically asks for the same.
Q: How early should I arrive for the trip?
A: Passengers are required to reach the boarding place at least 30 minutes before the scheduled departure time of the bus.
Q: Are there any discounts available on the route from Oxford to London?
A: Oxford to London is one of the popular routes and it’s quite likely that you may get exciting discounts on booking bus tickets through redBus on this route. It would be better if you plan your journey in advance and book your tickets so that you can get the best price and best seat for your trip.
Q: How can I book a bus ticket online from one route to another?
A: You can simply log on to www.redbus.com, choose any specific country you would like to book a bus in, and select the source and destination. After choosing the route and the date, you will find a number of options for buses available. redBus site is user-friendly and booking a bus ticket is just a matter of a few minutes.
Q: Can I reschedule my bus ticket on this route?
A: Yes, you can. However, this option is available with some selected bus operators on www.redbus.com. You just have to enter your bus ticket number and email address, verify your ticket details, and choose a reschedule date.
Q: Where can I find the location of my bus stop?
A: As you get the listing of buses available on a selected route, you can click on the 'Boarding & Dropping Point' tab to check the exact location of your pickup and drop-off points. redBus also offers ‘Track my bus’ facility in a few countries to check the live location of the bus.
BOARDING & DROPPING POINTS
Oxford
London
Enjoy your bus trip from Oxford to London !
You want to go the other way? check all offers from London to Oxford
Popular Bus Routes from Oxford
Popular Bus Routes To London
Top Bus Operators in Oxford
Top Bus Operators in London
Other Bus Routes From Oxford
Other Bus Routes To London